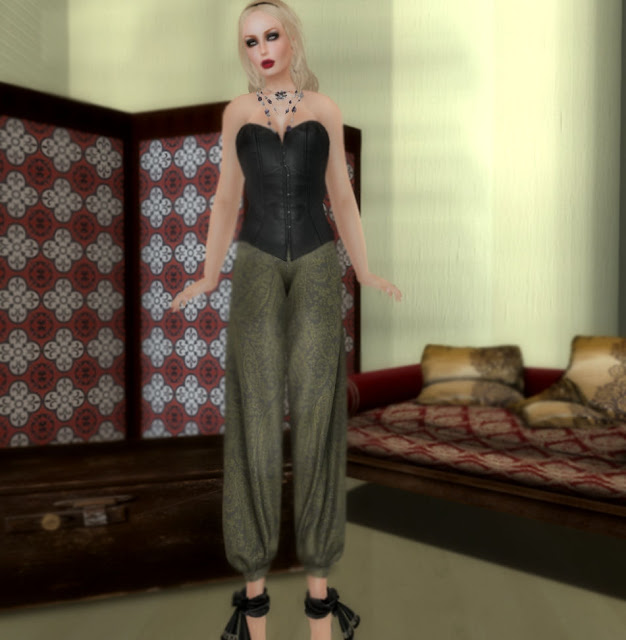 Following on from Strawberry Singh's blog post titled "Procrastination Meme", I'm joining in and sharing 10 random facts about my SLife.  In terms of procrastination, yep, I'm guilty and am trying to work on this in my first life.  I've found since the disasters of 2012, procrastination has become a real problem and must be destroyed.  It doesn't sit well with me because I've always been a highly motivated person so this sense of delaying the inevitable is seriously doing my head in.

Q1 - What is the rez date for your current SL Avatar that you use most often?
Chalice Carling rezzed on 10 October 2007.  She is the only avatar I use.  When I rezzed, I spent two months hiding in the shadows because I had no clue what I was doing but I quickly found the shops and knew immediately that I wanted to take on the role of fashion model.  Slowly I emerged from the dark and have never stopped shopping.  If only I'd left joining until after the 22nd of October, I'd be a Scorpio like I am in RL.

Q2 - Where was the first place you made friends as a newb and got to know people in Second Life?
God I can barely remember it but I think that real friendships were forged on the runway at Evane Modeling Agency (prior to Mimmi Boa taking it over) in early 2008.  I was in a competition whereby you had to spend a lot of time posing on the runway for votes and that's were I met my three favorite people, Vixie Rayna, Jula Carnell and Mimmi Boa.  That's also where I came to realize that there were people in the modeling business who will stop at nothing to try to rip you off - promise the world and deliver nothing.  You'd think we would all know this but when you get caught up in competitions somehow its easy to loose touch with the reality of what is actually going on.

Q3 - Where do you spend most of your SL time now?
In my fabulous Pre-Fabulous home on my island at Minoo.  I wish I could say I was hobnobbing with the rich and (in)famous but no, at the moment I'm a bit of a hermit spending most of my time shopping and blogging.  Fornicola Butuzova makes the most incredible homes in SL by a country mile.

Q4 - Who is your closest friend in Second Life? (only pick one)
Well I have to say my closest SL friend is Vixie Rayna even though I never actually see her face-to-face anymore because I tend to spend most my time in SL blogging.  Like all good friends though, I know she is around and never have to apologize.  She is such a beautiful person and is always concerned about those in her world.  Love ya Vi xx.

Q5 - What is the most favorite thing in your inventory? (only pick one)
I would have to say it is the Chalice necklace given to me on one of my rezz days by Vixie.  I totally treasure it as a reminder of the amazing fun times we used to share.

Q6 - The last thing you purchased in Second Life?
Fatpack of the new Mya skin by Belliza. Thank you for your efforts in creating this gorgeous skin Tricky B.

Q7 - What color clothing does your avatar wear most often?
Hmmmm.  Now I admit to wearing a lot of black but I do love pastel colors and love it when I piece together an outfit from a variety of designers that includes soft and feminine colors.  Actually I love all colors and try to source amazing textures and materials for the clothes I include in my blog.

Q8 - Do you prefer to walk, run or fly?
This makes me laugh.  I just realized I walk nearly everywhere and that I should turn my run on to cover more shopping ground.  I'm a shocking flyer and I give Cha Cha concussion when I'm flying.  That and continual thumping noises I hear if I have my earphones on when I bump into everything. Can I turn that thumping noise off by the way?  It's so irritating.

Q9 - What is the craziest thing you’ve ever done in SL?
Well this was one day in SL that I nearly peed my pants from laughing so hard. Years ago, a lot of top models worked with Impacratrice Breiz of Captured Photography to create SL publications and runway shows etc.  It was a lot of fun over many months and one day Vixie and I rezzed a gazillion dog poo's in Impa's house.  No room was untouched...in the bathroom sinks, kitchen cupboards...everywhere.  We were laughing so much on voice I couldn't breathe.  Needless to say hundreds of dog poo's were returned to my inventory...it was so worth it though for the lol's.

I also had fantastic fun times when I worked for the Arai Modeling Agency (now closed).  That was my training ground for modeling and on my first show I ended up nude, bald and embarrassed walking the runway to comments like - 'omg she's got nothing on'.  Now THAT was funny.  If ever there was a moment I wanted to exit SL, that was it.

Q10 - Who would you like to play YOU, in the movie of your SLife?
Definitely Drew Barrymore...she's hot.